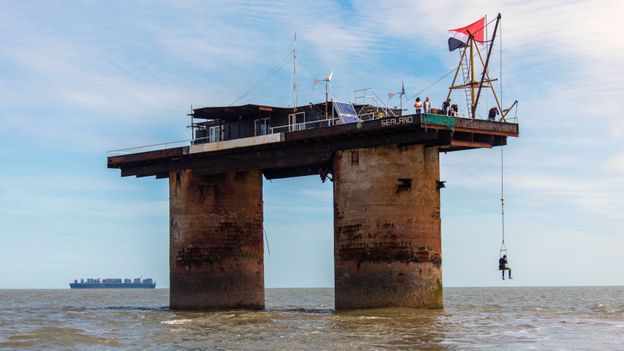 The Principality of Sealand is a micronation that claims Roughs Tower, an offshore platform in the North Sea approximately 12 kilometres (7.5 mi) off the coast of Suffolk, as its territory.

Since 1967, the decommissioned HM Fort Roughs has been occupied by the family and associates of Paddy Roy Bates, who claim that it is an independent sovereign state.

Bates seized it from a group of pirate radio broadcasters in 1967 with the intention of setting up his own station at the site.

He attempted to establish Sealand as a nation state in 1975 with the writing of a national constitution and establishment of other national symbols.

The United Nations Convention on the Law of the Sea, in force since 1994 states: “Artificial islands, installations and structures do not possess the status of islands.

They have no territorial sea of their own, and their presence does not affect the delimitation of the territorial sea, the exclusive economic zone or the continental shelf.”

Since 1987, Sealand has lain within the United Kingdom’s territorial waters.

Bates moved to the mainland when he became elderly, naming his son, Michael, as regent. Bates died in October 2012 at the age of 91. Michael lives in Suffolk, where he and his sons run a family fishing business called Fruits of the Sea.

In 1943, during World War II, HM Fort Roughs (sometimes called Roughs Tower) was constructed by the United Kingdom as one of the Maunsell Forts, primarily to defend the vital shipping lanes in nearby estuaries against Nazi Kriegsmarine mine-laying aircraft.

It consisted of a floating pontoon base with a superstructure of two hollow towers joined by a deck upon which other structures could be added. The fort was towed to a position above the Rough Sands sandbar, where its base was deliberately flooded to sink it on its final resting place.

Roughs Tower was occupied in February and August 1965 by Jack Moore and his daughter Jane, squatting on behalf of the pirate station Wonderful Radio London.

On 2 September 1967, the fort was occupied by Major Paddy Roy Bates, a British subject and pirate radio broadcaster, who ejected a competing group of pirate broadcasters.

Despite having the necessary equipment, he never began broadcasting. Bates declared the independence of Roughs Tower and deemed it the Principality of Sealand.

In 1968, British workmen entered what Bates claimed to be his territorial waters to service a navigational buoy near the platform.

Michael Bates (son of Paddy Roy Bates) tried to scare the workmen off by firing warning shots from the former fort.

As Bates was a British subject at the time, he was summoned to court in England on firearms charges following the incident but as the court ruled that the platform (which Bates was now calling “Sealand”) was outside British territorial limits, being beyond the then 3-nautical-mile (6 km) limit of the country’s waters, the case could not proceed.

In 1975, Bates introduced a constitution for Sealand, followed by a national flag, a national anthem, a currency and passports.

In August 1978, Alexander Achenbach, who describes himself as the Prime Minister of Sealand, hired several German and Dutch mercenaries to lead an attack on Sealand while Bates and his wife were in England.

Achenbach had disagreed with Bates over plans to turn Sealand into a luxury hotel and casino with fellow German and Dutch businessmen.

They stormed the platform with speedboats, Jet Skis and helicopters, and took Bates’s son Michael hostage.

Michael was able to retake Sealand and capture Achenbach and the mercenaries using weapons stashed on the platform.

Germany then sent a diplomat from its London embassy to Sealand to negotiate for Achenbach’s release. Roy Bates relented after several weeks of negotiations and subsequently claimed that the diplomat’s visit constituted de facto recognition of Sealand by Germany.

In 1997, the Bates family revoked all Sealand passports, including those that they themselves had issued over the previous 22 years.

There were thought to have been about 150,000 in circulation.

This was due to the realisation that an international money laundering ring had appeared, using the sale of fake Sealand passports to finance drug trafficking and money laundering from Russia and Iraq.

The ringleaders of the operation, based in Madrid but with ties to various groups in Germany, including the rebel Sealand Government in exile established by Achenbach after the attempted 1978 coup, had used fake Sealandic diplomatic immunity and license plates.

They were even reported to have sold 4,000 fake Sealandic passports to Hong Kong citizens for an estimated $1,000 each.

On the afternoon of 23 June 2006, the top platform of the Roughs Tower caught fire due to an electrical fault.

A Royal Air Force rescue helicopter transferred one person to Ipswich hospital, directly from the tower.

The Harwich lifeboat stood by the Roughs Tower until a local fire tug extinguished the fire. All damage was repaired by November 2006.

In January 2007, The Pirate Bay, an online index of digital content of entertainment media and software founded by the Swedish think tank Piratbyrån, attempted to purchase Sealand after harsher copyright measures in Sweden forced them to look for a base of operations elsewhere.

Roy Bates died at the age of 91 on 9 October 2012; he had been suffering from Alzheimer’s disease for several years. He was succeeded by his son Michael.

In 2009 and 2010, Sealand sent teams to play in various ultimate club tournaments in the United Kingdom, Ireland and the Netherlands. They came 11th at UK nationals in 2010.

In 2012 Sealand was represented in the flat track variant of roller derby, by a team principally composed of skaters from the South Wales area.

On 22 May 2013, the mountaineer Kenton Cool placed a Sealand flag at the summit of Mount Everest.

In 2015, the runner Simon Messenger ran a half-marathon on Sealand as part of his “round the world in 80 runs” challenge.

In August 2018 competitive swimmer Richard Royal became the first person to swim the 12 km from Sealand to the mainland, finishing in 3 hrs 29 mins. Royal visited the platform before the swim, getting his passport stamped. He entered the water from the ‘bosuns chair’, signalling the start of the swim, and finished on Felixstowe beach. It was accredited as an inaugural and therefore current world and British record by the World Open Water Swimming Association (WOWSA) and the British Long Distance Swimming Association (BLDSA).

Royal was subsequently awarded with a Sealand Knighthood by Prince Michael.

The swim was the subject of a short documentary film entitled Escape from Sealand.