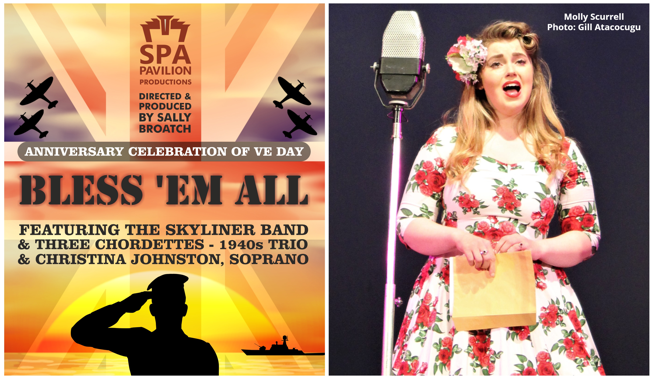 Written by Gill Atacocugu – Who attended the Dress Rehearsal on the Evening of Thursday 5th May, 2022

The audience are invited to dress up in 1940’s costumes to celebrate this era.

Also, from 1pm on Sunday 8th May, there will be entertainment going on from outside The Terrace (at the Spa) with Lindy Hop dancers and vintage vehicles.

If you have an interest in the 1940’s and like supporting local musical and theatrical talent, then Bless ‘Em All is the show for you.

It was specially researched and written by Mike Henderson to mark VE Day in May 2020, however, due to Covid it has had to be rescheduled. Directed by the extremely creative Sally Broatch, the major theme throughout the show is the importance of radio in the 1930’s and ’40’s. Before the prominence of television in the majority of people’s homes, radio was key. It was the main source of both information and entertainment for all the family and essential to keeping people updated on matters during the Second World War.

Through his writing, Mike illustrates how both the listeners and the radio producers dealt with the ever changing uncertainty of war. Coupled with this, how radio shows managed to keep the public’s spirits high by transmitting performances from popular acts and bands of the decade, such as The Glenn Miller Band.

Reference is made to how radio manager, Jerry Wilcox (Mike Cook) had to follow advice from a very serious Ministry Man (Mike Henderson) and insist that his staff stay in the basement of Broadcasting House in order to keep safe during the war.
The script also touches upon the important matter of women taking over roles that had previously been confined to men.

Although Jerry is not sure whether Assistant Sound Engineer, Gwen (Stephanie Brown) is capable of taking over from Terry (Colin Lee Bennett) when he is called to fight for his country, many of her colleagues have faith in her abilities. She goes on to do a sterling job for the radio station.

At the outset of this show, we see the cast dashing to various points of the stage with furniture or props in hand.
The placement of such objects defines the boundaries between life at home in wartime Britain and the way a radio station operated back then.

From the outset, the audience is introduced to The Family.
They consist of mother, father, child and maternal grandma, and are generally staged around their radio set.

The family initially question what life holds for them as they hear, over the airwaves, that Britain is once again at war with Germany. Stoic grandma, played by Laura Locke, reflects on the Great War as she mentions, in her East End accent, how people tolerated mustard gas and the importance of using every part of an animal in order to feed the family. This develops into talk of males being conscripted, children possibly being evacuated and the use of gas masks in schools – as pupils recite their times tables in muffled tones!

Throughout the show, there are multiple characters of note, as well as memorable situations and foot tapping songs.
The radio station, keen to carry on entertaining the public, transmits a variety of programmes for a selection of ages, whilst mentioning that programmes maybe interrupted if the sirens sound.

Acts such as comedy duo, Flanagan and Allen, played by Phil Cory and Mike Henderson, are featured performing part of an original script. While Mavis the tea lady (Hilary Kenny) is blatantly star struck by their presence.
The Beverley Sisters, played by the Three Chordettes, excellently showcase their sweet voices and upbeat dance routines as they sing familiar tunes such as Don’t Sit Under the Apple Tree and Run Rabbit Run. Later, the Three Chordettes appear again but this time as the close harmony trio, The Andrews Sisters.

Audience participation is required when there is a wonderful song and dance routine featuring Pearly Queens and a Pearly King – as they do the Lambeth Walk.
Here one has to praise the dance troupe, led by Katie Ford, as they perform to this and many other numbers in the production.

In Act Two we witness a humorous skit when Maurice, a keeper at London Zoo, is invited into the radio station to talk about the characteristics of snakes.

As he does so Mary and Archie, two Ovaltinies, are also present. Watch out for a huge wicker basket and Roger the snake! Another recording which takes place in the radio station is of Phyllis (Samantha Horsfield) and Robert (Phil Cory) who are brought in to warn the public that ‘Careless Talk Costs Lives’ .
Their public information message illustrates another important function of radio during wartime.

The arrival of the Americans to help with the war effort is also referenced in the show. Gwen gets excited at their presence saying they have ‘nylons and chocolate’, whilst Mavis dreams of heading to New York to catch a show.

This lovely production draws to a close with professional soprano singer, Christina Johnson, performing as Vera Lynn – a performance you should not miss.