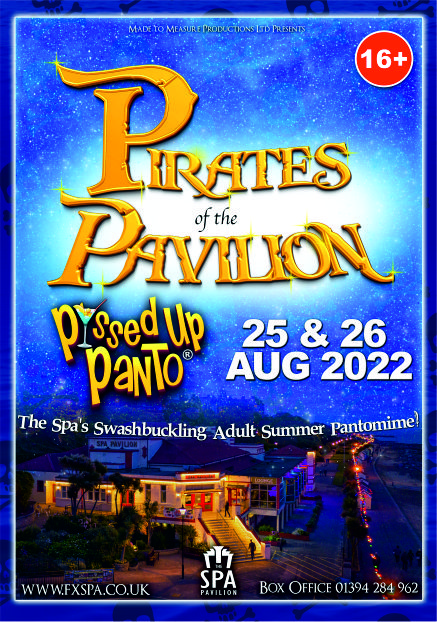 Don’t panic! The SPIRIT OF THE SEAS (Tegen Jones) is on hand to sprinkle some sparkle and weave a spell to ensure the crew of the Saucy Sally can save the day…with some glitz and glamour thrown in for good
measure, of course!

But it’s not all for the kids…Have you ever watched a pantomime and wondered what mischief the cast
would get up to if there weren’t any children in the audience? What if the cast have had one too many?!
Now’s your chance to find out…!

In addition to the matinee family shows, we’re featuring two evening performances of ‘Pssed Up Panto’…and it won’t be for the faint-hearted – it’s panto as you’ve never seen it before! The hilarious performances are packed to the brim full of innuendo, hilarious comedy routines, parodies of well-known songs and audience participation, creating a performance that’s sure to be hilarious, cheeky, saucy and sometimes just a little bit naughty…okay…very naughty…!

Along with all the usual adult panto fun, the audience vote each night for the one performer who must complete savage drinking challenges throughout the show. As the victim gets slowly more and more sozzled, they must, along with the rest of the cast, keep the show rolling on to it’s happy climax…

Our cast are professional pantomime performers…and some of them are professional drinkers, so this is a night that audiences will remember for the rest of their lives! Does Seadog Billy have a 10 foot willy? Will the Spirit of the Seas work wonders with a magic wand?

Will Captain Filibuster cop off with one of the male dancers? There’s only one way to find out…boys and girls… Our crew can’t wait…and neither should you – don’t be Sharkbait, climb aboard and hook your tickets now! PIRATES OF THE PAVILION hits the stage on 25th & 26th August with family shows at 3pm and ‘Pssed Up
Panto’ at 8pm each day. Tickets start at £12 and are available online at fxspa.co.uk or by calling the Box
Office on 01394 284 962.