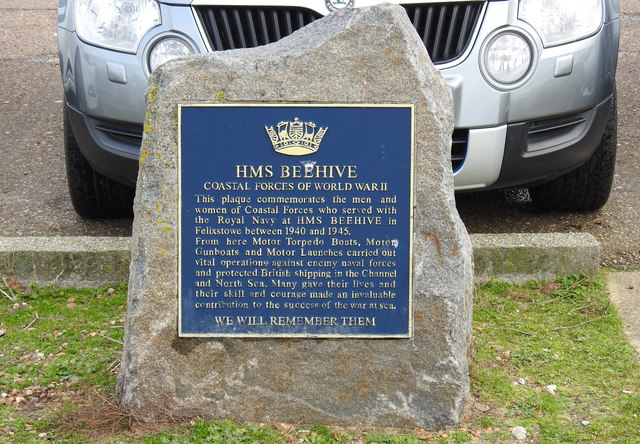 This article is the naval autobiography of Alec Kellaway.

Alec served in the Royal Navy from January 1936 to November 1947. His story shows what life was like training for the Navy immediately before the war as well as service in a wide variety of ships during the conflict.

The book was written by Alec himself and has previously been published on the HMS Hood Association web site (www.hmshood.com) and in the HMS Cossack Association newsletters.

On arrival at Felixstowe I was taken to HMS Beehive, a shore base for coastal forces, there I was told that I was a replacement for a motor mechanic who had fallen overboard and drowned.

I was also told that ML 100 was at Ipswich on the River Orwell, getting overhauled and I would take over ML 105 as their mechanic was on leave and I would stay there until his return.

Now this small flotilla of MLs, four in number, were the first type of MLs (A) produced and had three engines. There were only ten of this class built, one of the main reasons being that the B class only required 2 engines, thereby saving many engines of the type used.

Though ML 100 had been built for anti-submarine warfare she and others in the flotilla had been converted into mine layers, laying their mines in enemy coastal waters. The area our boats operated in was mainly around the Hook of Holland, a very busy area for German conveys. My stay on 105 was extended more than the motor mechanics leave period as he was taken ill and my boat having extra electrical instruments being fitted did not need my presence.

I suppose my stay on 105 stretched over 6 weeks in which we did about two mine laying operations. During this time there should have been a mess bill for the supplies we purchased from the NAAFI, which was nearly a daily routine, however there was a negative bill from the NAAFI and this should not be. After inquiries into the circumstances it would appear that the rating obtaining the supplies would on getting the goods retrieve the demand note without the Naafi’s assistants knowledge so there was no record of purchase. The rating denied any knowledge of this activity and as there was no proof of evidence against him he was not charged but returned to his main depot. This suited him nicely as he was a naval pensioner recalled for war service and would because of his age not have to go to sea again.

I was presented to the crew who except for the leading seaman coxswain were either hostility only ratings or reservists recalled for war duties. It was very peculiar that the CO and I did not get on very well all the time I was aboard 100, though we had a good relationship regarding my duties which could not be faulted. My engine room staff consisted of a Leading Stoker and two stokers, the three of them all reservists, had been on ML100 from her commissioning day.

While on 105 I was told sarcastically that 100 was not likely to do any operations as every time she was due to go out she invariably broke down with some engine failure or other. I thought that this was stretching the point a bit and was determined to make sure that there were no engine failures on my part. I could not understand why the boat had this reputation but it was known throughout the flotilla that she was a jinx.

HMS Beehive, our base, was a very large establishment that catered for about thirty two boats consisting of Motor Torpedo boats, Motor Gun boats and us MLs, who were a pain in the neck for the German shipping. Many a night would see anything up to thirty boats out on operations over the Dutch Coast. The torpedo and gun boats were a nuisance to the residents of Felixstowe in the winter, as the water cooling system was fresh water the fresh water being cooled by sea water, this meant that the boats engines had to be started up every so many hours to ensure that the fresh water did not freeze. This was not so bad during the daytime, but at night the starting up of many engines caused quite a din.

The dock area used by the boats was by the flour mill and the mill was supplied with flour by the Thames sailing barges that made regular trips to and from the mill. There was an area kept clear so that the barges had free access to the mill. The four MLs were berthed near the barge area, while the other boats were on the other side of the dock near the main buildings, one reason for this being that the crews of the MLs lived aboard, the other boats crews were accommodated in the main building as the living space on these boats was very limited and the crews only went on board for routine maintenance and sea duties.

The main building also accommodated the Royal Air Force staff who flew and maintained a flight of Catalina flying boats. There was quite a difference between the shore base at Freetown and HMS Beehive. At Freetown the shore staff only came on board to assist in major problems where as Beehive’s shore staff did almost every check up throughout the boats.

This left the crew with only daily routine work to do. All my engine room checks were done by the shore staff, it was only left for me to ensure that my duties kept the engine room compartments sea worthy and to do everything possible to any failings at sea. Unlike the sea duties at Freetown where we would be at sea for three days or more our operation at Felixstowe took us from six PM one day to eight am the following day.
This operation was carried out only on specific nights and was performed on information supplied from intelligence quarters. In all I only did carry out ten mine laying operations during my stay at Felixstowe. Though on many occasions the boats went out to lay mines but the operation was cancelled and a couple of times the operation was aborted due to some defect on one of the flotilla. One such time being that my centre engines sustained engine main bearing trouble.

It was normal routine when leaving for mine laying, that my three staff would each man an engine for leaving harbour with me in attendance, on clearing harbour two of the staff would leave the engine room and myself plus one would stay and man the engines until we had cleared the coast and the boats were heading towards Holland.

It was generally the procedure for the three MLs in the operation to clear the harbour, turn to port and proceed towards Great Yarmouth which took about one and half hours and opposite Yarmouth turn to starboard heading towards Holland, at this point I would leave the engine room after checking that everything was in good working order. My three staff would then work between themselves to cover engine room duties. I would go and get my evening meal until about ten PM when the boats would be entering enemy waters. I would then return to the engine room until about one am when the mines would have been laid and we were leaving enemy waters. My staff would operate the engine room until we finally entered harbour.

To return to my centre engine troubles on that specific night, I was entering the wheel house which was above my cabin, when our flotilla navigator whose responsibility it was to ensure that the mines were laid in the exact designated area, said to me that he was having difficulty getting a reading on the depth recorder. It would appear that the electric pulse being transmitted to the seabed was being vibrated out of line by some unknown vibration from within the boat. He did state that we were nearing our laying area but that if he could not get an accurate depth reading the operation would have to be aborted so could I try and locate the interference. I immediately went into the engine room and the first thing I did was to check all the instrument panels; I noticed that the centre engine oil pressure gauge was reading 15lbs per square inch instead of 45lbs per square inch. This indicated to me that the main bearings of the engine were damaged and would be causing the vibration. I then checked the engine pressure control unit and found that this was loose, I reset it and tightened the locking nut, the oil pressure returned to normal but the damage was done, it only remained to shut the engine down and report my action to the bridge. The mine laying operation was called off and the boat returned to port.

WW2 People’s War is an online archive of wartime memories contributed by members of the public and gathered by the BBC. The archive can be found at bbc.co.uk/ww2peopleswar’

One thought on “Memories of HMS Beehive Felixstowe”