History of The Felixstowe Fury 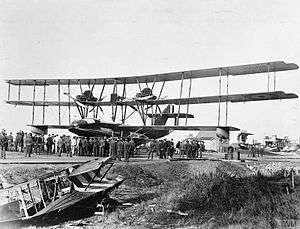 The Fury was the largest seaplane in the world, largest British aircraft at the time and the first aircraft to incorporate servo-assisted controls.

Although the test-flying programme demonstrated the aircraft’s suitability for long-distance flight, on 11 August 1919 (the eve of a planned flight from England to South Africa) it stalled into the sea on take-off, killing one member of the crew and suffering irreparable damage.

Development
The Fury was delivered to Felixstowe on 31 October 1918, its first flight taking place on 11 November with Porte at the controls.

Although conceived for military purposes, its first flight on Armistice Day meant focus was paid to the aircraft’s civilian capabilities.

The Fury’s unstaggered wings comprised the 3-bay lower wings, mounted near to the top of the hull, and a pair of 4-bay upper wings of larger span; all were supported by pairs of vertical struts and diagonal cross-bracing.

These were mounted on the middle wing and supported by additional struts, configured as two outboard tandem tractor/pusher (push-pull) pairs and one central pusher.

In addition to its triplane configuration, the Fury had a biplane tailplane with a triple rudder, mounted on a single vertical fin similar to the Curtiss triplane.

Not unlike the Model T the Fury was initially provided with servo-motors for the main flight control surfaces, designed by Major Arthur Quilton Cooper, but these were removed later without compromising the pilot’s ability to control this large aircraft.

At some point the engines were replaced with the more powerful 334 hp (249 kW) Eagle VIIIs.

By 24 April 1919, flight testing progressed so well that the Fury was able to perform a 7-hour flight. Flown initially with a designed weight of 24,000 lb its overload weight was 28,000 lb, the aircraft performed well at both limits.

Operational history
With the intense competition in early 1919 to achieve the first transatlantic flight, it was planned to join other teams in the race by shipping the Fury to Cape Broyle, Newfoundland.

The intention being a non-stop flight, however the aircraft’s size presented a problem as no vessel with a capacity large enough could be found as transport and the project was officially opposed on grounds of expense, despite the crossing being well within the Fury’s capabilities; fuel capacity was 1500 gallons (6819 litres).

The Air Ministry’s preference to leave the non-stop achievement to a commercial venture, led to the abandonment of the attempt about the third week of May 1919, when flight tests resumed.

The first Atlantic crossing by the Curtiss NC-4 starting 8 May, reached Lisbon 27 May 1919 arriving in Plymouth on the 31st to great fanfare as the first flight from North America (United States and Canada) to Great Britain. The first non-stop Atlantic crossing by Alcock and Brown followed a few weeks later using a modified Vickers Vimy landing in Clifden, Ireland 15 June.

A cutting from The Illustrated London News 16 August 1919, showing wreckage of the Fury being hauled toward a slipway at the Seaplane Experimental Station

Plans were then made for another long-distance flight, this time for the 8,000-mile (12,875 km) flight from England to Cape Town, South Africa via Gibraltar, Malta, Alexandria, Khartoum, Victoria Nyanza, Lake Tanganyika, Lake Nyassa, Beira and Durban.

This was due to start on 12 August 1919 from Plymouth; refuelling and revictualling depots were establish throughout the journey supported by detailed meteorological reports.

Final preparations were being made on 11 August at Felixstowe when the aircraft side-slipped at low altitude and crashed at 90 mph shortly after take-off, breaking up on impact. The accident in the harbour about 500 yards off-shore witnessed by large crowds of holiday makers.

Despite attempts at rescue, one of the 7-person crew (wireless operator Lt S.E.S. McLeod), remained strapped to his seat and drowned.

McLeod’s body was recovered after the rescue and the wreck was eventually towed ashore.

The crash was a surprise as the Fury was subject to exhaustive tests in the 12 weeks prior to the flight, surpassing the crews expectations who had every confidence in the aircraft. Flight tests were in accordance with RAF safety margins, however Chief of the Air Staff, Air Vice Marshal Hugh Trenchard regarded the journey as a service reliability test and no details of the project were published

The Felixstowe Fury was the last aircraft to be designed by Porte at Felixstowe; demobilised, he already left the Royal Air Force working with the Gosport Aircraft Company on their flying boats.

Without Porte and Chief Technical Officer John Douglas Rennie to supervise, the Fury may have been loaded incorrectly.

Major Moon at the controls apparently left the water before the safe flying speed and with insufficient power left to draw on, the aircraft stalled.

Back in the day: SS Skagerak Explodes After Hitting Mine Near Trimley