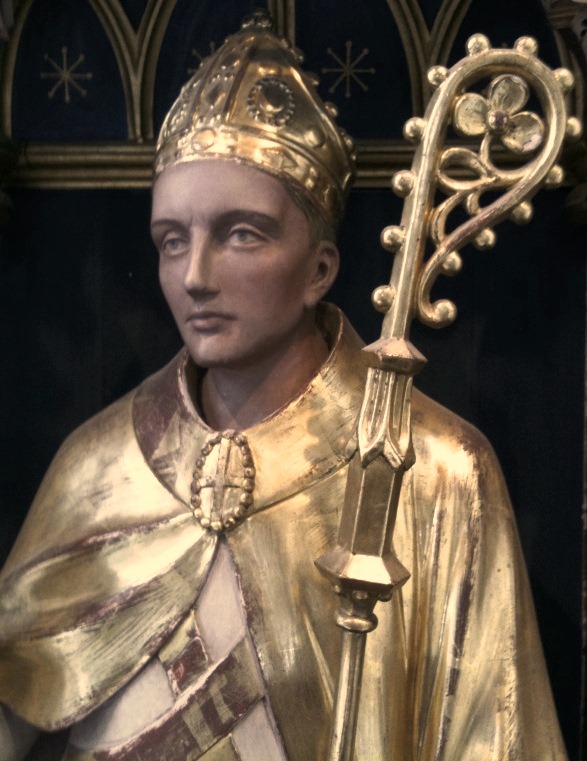 Felix of Burgundy, also known as Felix of Dunwich (died 8 March 647 or 648), was a saint and the first bishop of the East Angles.

He is widely credited as the man who introduced Christianity to the kingdom of East Anglia.

Almost all that is known about the saint originates from The Ecclesiastical History of the English People, completed by Bede in about 731, and the Anglo-Saxon Chronicle.

Bede praised Felix for delivering “all the province of East Anglia from long-standing unrighteousness and unhappiness”.

Felix, who originated from the Frankish kingdom of Burgundy, may have been a priest at one of the monasteries in Francia founded by the Irish missionary Columbanus: the existence of a Bishop of Châlons with the same name may not be a coincidence.

Felix travelled from his homeland of Burgundy to Canterbury before being sent by Honorius to Sigeberht of East Anglia’s kingdom in about 630, (by sea to Babingley in Norfolk, according to local legend).

On arrival in East Anglia, Sigeberht gave him a seat at Dommoc (possibly Walton, Suffolk or Dunwich in Suffolk).

According to Bede, Felix helped Sigeberht to establish a school in his kingdom “where boys could be taught letters”. He died on 8 March 647 or 648, having been bishop for seventeen years. His relics were translated from Dommoc to Soham Abbey and then to the abbey at Ramsey.

After his death, Felix was venerated as a saint: several English churches are dedicated to him. Felix’s feast date is 8 March.

Felix came from the Frankish kingdom of Burgundy, although his name prevents historians from conclusively identifying his nationality.

According to Bede, he was ordained in Burgundy.

It is possible that Felix was associated with Irish missionary activity in Francia, which was centred in Burgundy and was particularly associated with Columbanus and Luxeuil Abbey.

Columbanus had arrived in Francia in about 590,[5] after leaving Bangor along with twelve companions and going into voluntary exile. Upon Columbanus’s arrival, he was encouraged to stay, and in about 592 settled at Annegay, but was then forced to find an alternative site for a monastery at Luxeuil, when lay people and the sick continually sought the counsel of himself and his fellow monks.

The connection between the Wuffingas ruling dynasty and the abbess Burgundofara at Faremoutiers Abbey was an example of the associations that existed at the time between the Church in East Anglia and religious establishments in Francia.

Such associations were partly due to the work of Columbanus and his disciples at Luxeuil: together with Eustasius, his successor, Columbanus inspired Burgundofara to found the abbey at Faremoutiers.

It has been suggested that a connection between the disciples of Columbanus, (who strongly influenced the Christians of Northern Burgundy) and Felix, helps to explain how the Wuffingas dynasty established its links with Faremoutiers.

Higham notes various suggestions for where Felix may have originated, including Luxeuil, Châlons or the area around Autun. Other historians have made connections between Felix and Dagobert I, who had contact with both King Sigeberht of East Anglia and Amandus, a disciple of Columbanus.

McLure and Collins note that there was a bishop named Felix who held the see of Châlons in 626 or 627. They suggest the possibility that Felix may have become a political fugitive as a result of losing his see at Châlons after the death of Chlothar II in 629.

Soon after his arrival at Sigeberht’s court, Felix established a church at Dommoc, his episcopal see, which is widely taken to mean Dunwich, on the Suffolk coast.

Dunwich has since been almost totally destroyed by the effects of coastal erosion. Other historians have suggested as an alternative site for Felix’s see the coastal Walton, Suffolk near Felixstowe, where there was once a Roman fort, Walton Castle, since washed away by the sea.

A church and priory were dedicated to him there by Roger Bigod in 1105.

Bede related that Felix started a school, “where boys could be taught letters”, to provide Sigeberht with teachers.

During his years as bishop, the East Anglian Church was made still stronger when Fursey arrived from Ireland and founded a monastery, at Cnobheresburg, probably located at Burgh Castle, in Norfolk.

Felixstowe was named after the saint, though an alternative meaning for Felixstowe, “the stow of Filica”, has been suggested.