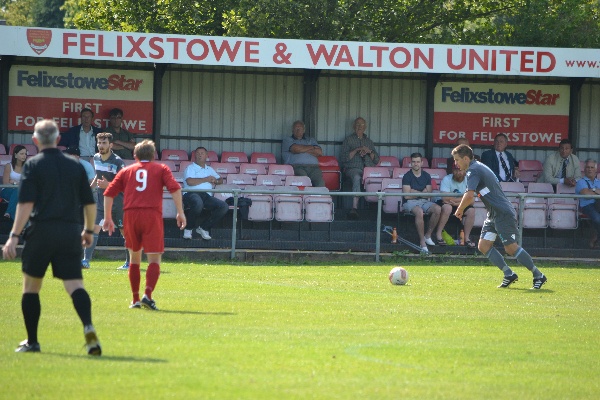 Felixstowe & Walton United FC intend to appeal against a fine of £1,000 handed by the Eastern Counties Football League.

Statement from The Executive Committee

The Management committee of the league heard the charge against the club of a breach of Rule 15, withdrawing the Reserves from the First Division North after 31st March, and made the decision to impose a fine of £1,000.

The Club have an excellent relationship with the Eastern Counties League going back 45 years.

With the extraordinary circumstances we, and every club find themselves in, difficult decisions had to be made to protect the club as a whole.

The decision to withdraw the Reserves from the ECL was one that was not made lightly, but was essential to ensure we survived the effects of Covid-19.

The costs of operating a side at Step 6 amounted to a five figure sum, a sum that was impossible to sustain given the devastating impact on the club finances since March. The loss of key sponsorship, matchday and facility income, and our event programme being cancelled, has meant the club is facing a financial black hole, and despite cost savings being made throughout the club, it was felt the voluntary demotion of the Reserves to Step 7 would save 80% of the costs for Step 6, whilst still ensuring we could field a side at a good level.

We have been overwhelmed with support from so many during the last few months to fill the financial void left by Covid, a void that will increase until we can return to some kind of normality. From players forgoing wages, sponsors coming to our aid, grants from Government and sporting bodies, and most notably from our incredible supporters raising funds through our Crowdfunder and other fundraising campaigns.

To be hit with a £1,000 fine for the late withdrawal from the league, undermines the support we have received from the masses, and puts the club closer to the cliff edge, and doesn’t take into account the genuine reasons, in exceptional circumstances we find ourselves in.

Clubs are going bust left, right and centre and to be hit with a fine of this size is a real kick in the teeth after so many years of membership of the ECL.

Whilst the club understands the rules are in place to prevent late withdrawals during normal times, we are extremely disappointed that the exceptional circumstances were seemingly not taken into account in these far from normal times, and as such the club intend to exercise our right of appeal to The FA, with the hope of reducing or removing the fine.