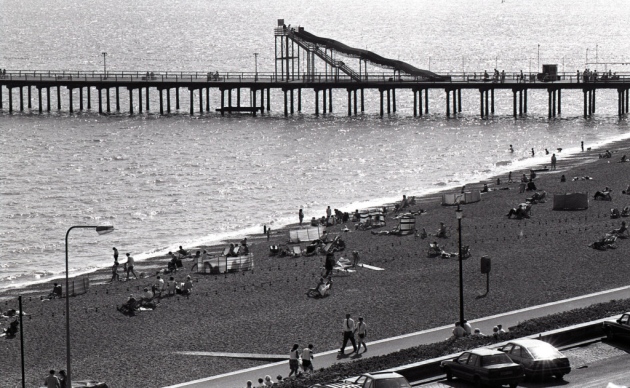 Felixstowe pier was once one of the longest Piers in the United Kingdom.

The Pier opened in August 1905 with a total length of 2,640 feet (800 m) and had its own railway station. Steamer services operated from the pier to various destinations.

During the war, the pier was sectioned to reduce the risk of enemy invasion, which it never fully recovered from, resulting in the pierhead being demolished after the war, having been left to deteriorate.

The pier was the last of a trio built for the Coast Development Company, which had been formed by a merger between Belle Steamers Limited and other local companies in 1898.

Although steamships had lost a percentage of their revenue due to the advent of the railways, there was still a lucrative market for sailing excursions and pleasure trips.

As the pier landing stage allowed easy mooring facilities, and the pier itself offered numerous entertainments, it was an obvious way forward for the two interests to be combined within one operating company.

The company was also associated with various enterprises and properties in the resorts where they owned piers. Belle Steamers became bankrupt during the First World War

The pier was constructed using timber, rather than iron, which was unusual for this period, though foreign timbers such as Jarrah and Greenheart had been increasing in popularity due to their resistance against worms and being more cost effective.

A 3ft 6in gauge electric tram service operated to and from the pier head.

Once one of the longest piers in Britain, complete with electric tramway (3.5ft gauge) transporting passengers and their luggage from end to end.

The original cost for a one-way journey was 1 pence.

Paddle steamer boat services took visitors to and from other resorts for 1 penny, including London Bridge and Great Yarmouth at a time when steamers faced competition from railway services.

The pier was sectioned during the war by the Royal Engineers for defence purposes to prevent enemy invasion.

Like most piers on the East Coast of Britain, Felixstowe Pier was sectioned during the Second World War for fear of German invasion and, in common with several, it was a situation that the pier would never really recover from.

The tramway had obviously been suspended and the now isolated seaward end, that had remained neglected throughout the conflict, was considered obsolete. This was subsequently demolished, reducing the pier’s length to a much shorter 450ft (136m).

In August 2017, a new £3 million pier and building opened to visitors with the official opening in October 2017, as part of a wider regeneration scheme for the area.

The pier decking extending over the sea remained; however due to safety concerns, visitors are not able to walk the entire length which has been inaccessible since around 1999 due to corrosion and rotten timer beams supporting the pier deck.

The original plan involved demolishing this section of pier until an alternate proposal to retain it was put forward.